A Look at Boating Injuries From Inside the ER

Lessons Learned From a Review of Boating-Related Emergency Room Visits

A 2018 study conducted by DAN Research examined 600 Emergency Room (ER) visits involving boating injuries and revealed some findings that may surprise you.

It may be no surprise that the majority of these injuries affected men, that they occurred during summer months or, given the cost of owning and maintaining a boat, that the average age among the injured adults was 42 years old. In fact, these findings add confidence that the results may be a reflection of the bigger picture of boating injuries in the US.

The following is a report of the study’s findings, along with a discussion of how many of the most common boating-related injuries and ER visits might be avoided.

The Consumer Products Safety Commission (CPSC) collect injury data from a sample of around 100 US Emergency Rooms. Every injury treated in these ERs is recorded in the National Electronic Injury Surveillance System (NEISS) by trained coders. The data are de-identified and made publicly available through the CPSC website.

Cases spanning a four year period were obtained from the CPSC. The data analyzed in this study consists of 600 consecutive presentations at US ERs with the word “boat” in the case description. These 600 do not include “show boat”, “boat trailer”, “boat show”, toy boats or amusement park rides.

Variables attached to each case were: Treatment date, age, sex, race, diagnosis, body-part injured, disposition, location where the injury occurred, if fire was involved, and up to two products involved in causing the injury. An additional code was created when race was described as “Hispanic”. In addition, each case description was read and each case was classified when it was clear if the injury occurred on land or sea, in or out of the boat, and if the boat was underway or stationary. Keywords were noted for the main hazard involved in the injury, and the activity that the boater was engaged in at the time of the injury was also noted.

Of the 600 injuries involving a boat, 83 (14%) could be identified as having occurred on land. These injuries are described here.

Of the other 517, which occurred while the boat was in the water, the monthly distribution is shown in Table 1.

The diagnoses are shown in Table 2.

The affected body parts are shown in Table 3.

Dispositions on leaving the Emergency Room are shown in Table 4.

Of the 517 injuries, six (1%) involved fire or smoke inhalation.

The most common products associated with these boating injuries are shown in Table 5.

Whether the boat was still or in motion at the time of the injury could be determined in 212 cases. Of those, the boat was moving when the injury occurred in 150 cases (71%). The most common hazards while the boat was stationary or moving are shown in Table 6.

The most common activities the boaters were engaged in at the time of the injury are shown in Table 7.

Among the 83 injuries that occurred while the boat was on land, the most common hazards and activities are shown in Table 8.

Of all the boating injuries included in this study, at least 14% occurred on land, highlighting that care must be taken even when the boat is out of the water, especially when working with tools, ladders, boat lifts or chemicals. The most common boating activities on land that resulted in a trip to the ER were working on the boat, getting on or off the boat, washing the boat, and operating a boat hoist. To reduce the likelihood of injury, vigilance must be shown when undertaking these otherwise mundane tasks.

The most common injuries were lacerations (cuts), abrasions, contusions, sprains, and strains, highlighting that boating injuries are largely traumatic rather than subtle. Hazards must be identified and mitigated or avoided. Fingers were the most commonly injured part of the body, followed by the head/face and trunk, and nine out of ten injuries were treated and released or left the ER without treatment. Among boaters taken to the ER in this study, fatalities were rare.

Getting in or out of the boat was, by far, the most common cause of injuries while the boat was stationary, and tubing the most common while the boat was moving. Being towed behind a fast-moving boat while sitting on an inflatable tube is a lot of fun, but a particular hazard associated with tubing is that when the boat turns the tube is propelled by centrifugal force in the opposite direction, with no means of modulating speed or direction. Collisions with stationary objects or other tubers are a common cause of tubing injuries, as is coming off the tube at high speed, resulting in sprains and strains.

Lacerations were more common among boaters engaged in fishing because of the necessity to handle sharp implements such as knives, hooks, and gaffs, not to mention working around the mouths of fish with sharp teeth. Every marine first-aid kit should be equipped with a sterilizing solution such as those containing isopropyl alcohol, plus some sort of topical antiseptic and sterile dressings. When prevention fails, immediate and appropriate first-aid will minimize the risk of later complications.

Ropes, ladders, tools and screws/nails also feature prominently in the boating injuries in this study and boaters should keep in mind that safety does not stop when the boat is docked or back on land. Indeed, getting on or off the boat was a common cause of injury both on land and while on the water. Regardless of where the boat is, boaters must remember the age-old wisdom, proven true over a thousand years of seafaring; always maintain three points of contact. 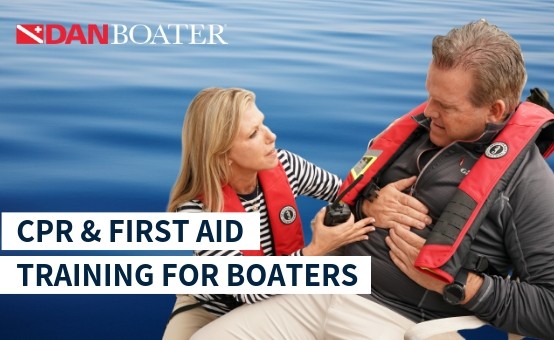 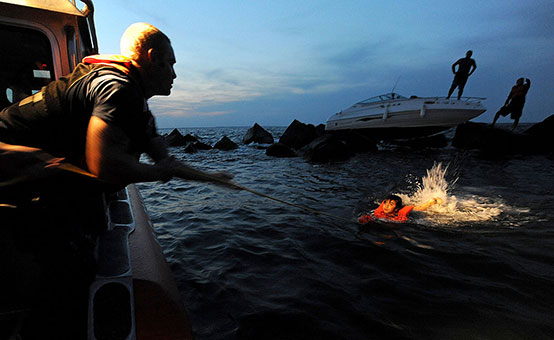